Each country has its beautiful cities, but in Spain they blend historic appeal, modern vivacity and a distinctly exotic quality like few others. Which can mean that when choosing which city in Spain to visit you’re often forced to cut favourites out of shortlists, such is the depth of the country’s appeal.

Thank goodness, then, for Andalucia. Spain’s southernmost region is packed with some of the country’s most fascinating cities – and here are just a few of our favourites. 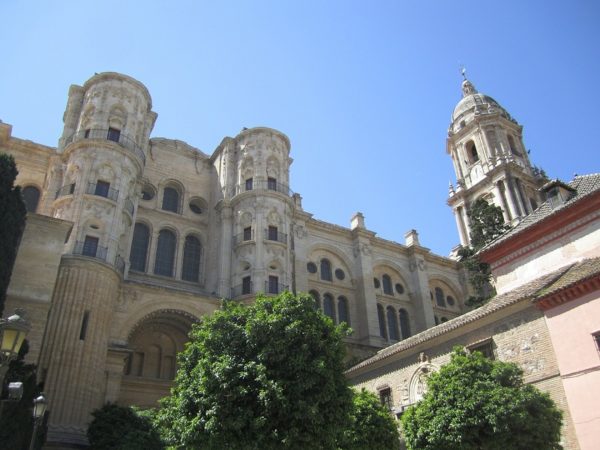 Once an earthy Mediterranean port city, Malaga now has it all: culture, history, architecture, shopping, dining, nightlife and sandy Mediterranean beaches. Indeed, this is a place where you can shop, dine, visit museums and lay on the beach all in the same day.

Geographically the city is dominated by the Gibralfaro hill on which stands the Alcazaba, a fortified Moorish palace from the 11th century. A little further up, on the crest of the hill, a 14th-century castle overlooks the city and its bay amidst spectacular panoramic views.

The foot of the Gibralfaro, where a Roman amphitheatre meets the city centre, forms the point at which past and present come together. Cross the street and you enter the old town, a wonderful maze of squares, streets and pedestrian shopping areas lined with elegant buildings. Crowning this area are the cathedral, built in Gothic, Renaissance and Baroque styles, and the Picasso Museum, home to the works of Malaga’s most famous son.

A little further along is the Carmen Thyssen Museum, along with the Centre Pompidou at the stylish Muelle Uno portside shopping and entertainment area, just two of many fascinating spots in what is fast becoming one of Europe’s cultural gems. Situated between the centre and the port is a stylish boulevard flanked on both sides by a tree-lined promenade. Here stately buildings alternate with the greenery of botanical gardens, an area that gradually gives way to beaches and the ‘La Malagueta’ suburb. 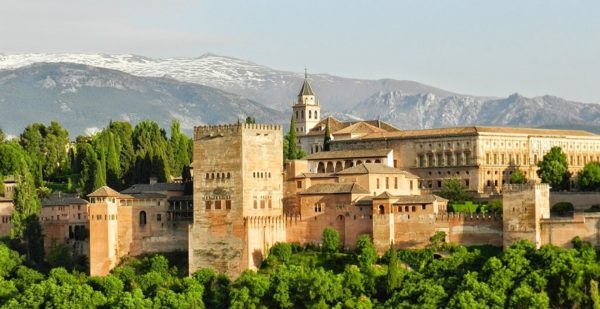 Another jewel in the Andalucian crown is Granada. Settled within a broad, fertile floodplain known as the Vega, this ancient city is above all known for its association with Moorish Spain, of which the legendary Alhambra palace-fortress remains the most tangible legacy. Surrounded by fragrant gardens, the latter encompasses an entire hilltop complex.

Though most views in Granada are characterised by this hilltop sentinel framed by the snow-capped peaks of the Sierra Nevada rising up behind it, the Alhambra itself looks out over the Albaicín – a charming maze of streets, squares and houses that still retains much of its medieval feel. Here you find stylish Arab-style baths and spas, Moroccan-inspired tetería tearooms and also houses whose private gardens, courtyards and rooftop terraces recall the days when this was the last Moorish capital of Andalucia.

From the rich ambience of the Albaicín, the city of Granada spreads out into an elegant baroque historic centre full of grand churches, imposing public buildings and beautiful monuments. In many ways a typically lively and impressive southern Spanish city, Granada is also the official birthplace of the tapa. So, expect many an opportunity to enjoy this very social way of dining across the many tapas bars and small restaurants that dot one of Spain’s most visited historic centres. See our full guide to Granada here. 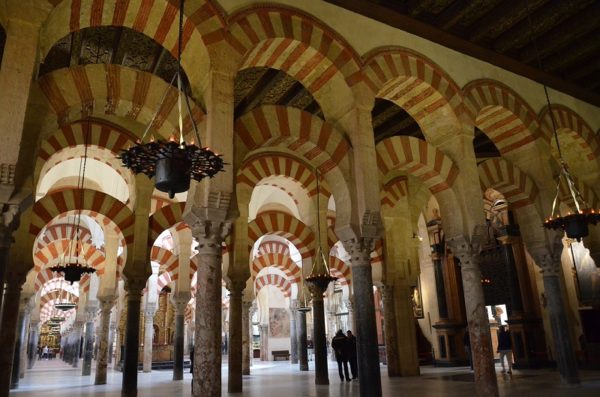 Straddling a curve on the Guadalquivir River, Cordoba is the embodiment of Andalucia’s glorious past. The city owes its prominent role in Spanish history primarily to its strategic location at the entrance to Andalucia. Famous leaders as diverse as Julius Caesar, Abd al-Rahman III and Ferdinand and Isabella fought to control the city at one time or another, so it’s not surprising that Cordoba has been destroyed and rebuilt more times than any other in Andalucia.

Though founded in pre-Roman times, Cordoba is above all famous for its magnificent Grand Mosque, the monumental structure that has become the symbol of the city. Surrounded by the tightly packed houses of the medieval Judería, or Jewish quarter, the mosque is one of the many architectural wonders within this corner of southern Spain, to which can be added later baroque edifices such as the Reyes Alcazares palace and the 14th-century Torre de Calahorra, which stands guard over the ancient river. 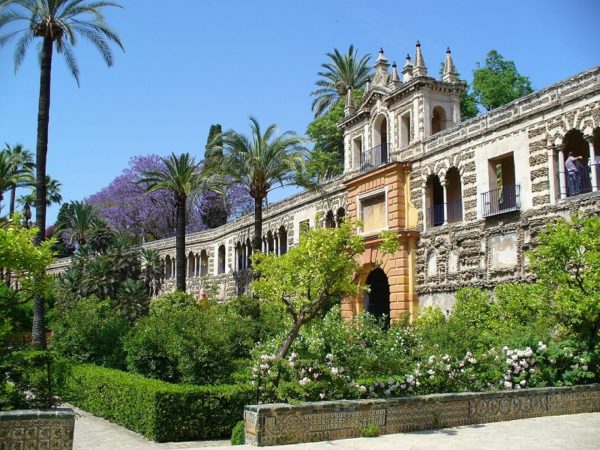 Sevilla, as it’s known locally, is the bustling capital of Andalucia, a sprawling old city full of life and sights. The city, and in particular the old quarter on the east bank of the Guadalquivir river, contains some of the finest buildings and monuments anywhere in Spain. They are the legacy of the centuries during which the riches of Central and South America flowed into Spain through the city, which at the time was not only the country’s main port but also one of the richest cities in Europe.

When you visit Seville you’re in the very heart of Andalucía, for it’s here that quintessentially Andalucian traditions such as bullfighting, flamenco music and vivacious street life come together. Bordered by the Guadalquivir river and guarded by the mighty 13th-century Torre de Oro, one of Seville’s most famous monuments and now a maritime museum, El Arenal used to be the bustling port area of the town, a district of munitions stores, artillery headquarters and shipyards. Today the quarter is dominated by the dazzling white bullring, the Plaza de Toros de la Maestranza, where bullfights, or corridas, have been held for the past two centuries.

Just beyond here lies one of the largest historic centres in Europe, an area that encompasses not only elegant shopping promenades but also the more tightly woven streets of an older area. Here you find the Moorish-style baths and teahouses, the stunning cathedral and its famous Giralda tower, the Reales Alcazares palatial complex and a host of quaint tapas bars and restaurants that form the heart of a lively Andalucian social scene.

Though newer, a part of Seville not to be missed is the Parque María Luisa, an architectural wonderland designed for the Ibero American World Trade Exposition of 1929. Today its magnificently creative buildings house embassies, museums, military headquarters and cultural and educational institutions. The grand five-star Hotel Alfonso XIII and crescent-shaped Plaza de España are the most striking features, but in summer the terraces of the old exposition pavilions come alive with street performers and live dance music that goes on until the early morning. 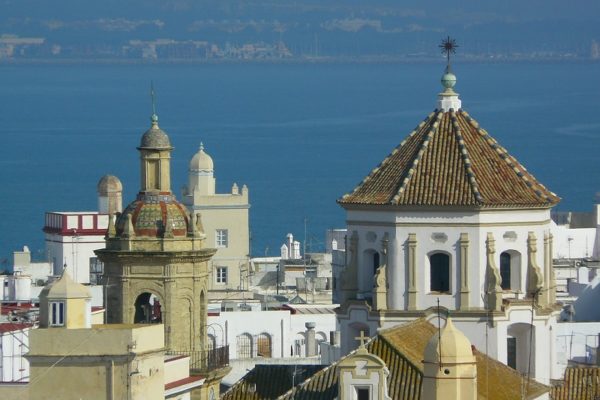 At Cadiz we’ve reached the Andalucian shore again – albeit on the Atlantic this time and the Costa de la Luz. Situated on a peninsula that juts out into the sea, and attached to the mainland by a narrow strip of land, Cadiz is surrounded by water on three sides. The port is in many ways different from other cities in southern Spain, its pastel-coloured houses flanking a yellow tiled cathedral that actually seems more at home in Cuba than in Spain.

The city’s position, dominating the entrance to the Mediterranean, has made it a place of great strategic importance since classical times. In fact, Cadiz is the oldest living city in Europe and a veritable archaeological treasure house. Its museums contain findings ranging from 2,500 year-old Phoenician sarcophagi to Roman statues and Moorish artefacts.

Favoured by its location, the city was long the port of call for ships returning with riches from the Spanish colonies in the Americas. Developing apace with the maritime commerce of Cadiz were the watchtowers that were built onto the flat roofs of merchants’ houses. Such was the competition among them that they employed teams of watchmen to look out for incoming ships. Numbers peaked at a little over 160 towers, 126 of which remain today. The most famous tower, the Torre de Tavira, became the official watchtower of the city in 1778, and today offers visitors a spectacular view of the entire city and its surroundings from its rooftop and its camera obscura.

From here, Cadiz is a sea of flat roofs strongly reminiscent of a North African city that seems to float in the deep blue water like a giant ship. It adds yet another dimension to the myriad sights and experiences offered up by Andalucian cities rich in history, culture, mystery and above all, life.

Inspired by our pick of the best cities to visit in southern Spain? Check out our guides to when to visit the region and what to see when you’re there and our hidden gems of Andalucia.