The Costa del Sol is aptly named. ‘Sol’ because there are +300 days of the shiny stuff, and ‘Costa’ because like gin and tonic, Fred & Ginger and all other great double acts, you couldn’t very well have sunshine if you don’t also have a nice stretch of beach to bask on.

At the heart of this sun-soaked strip of sea and sand sits Marbella. While the province of Malaga isn’t short of a decent beach or two (as covered in a previous post of ours) there are more than 20 beaches in Marbella alone. So move over overcrowding – there’s always space to enjoy your own corner of the Med on one of this selection of best Marbella beaches.

Beaches to the East of Marbella

This beach to the east side of Marbella next to Los Monteros is great for families, as its shallow waters are ideal for children to splash around in. The beach itself a large, open affair, pebbly towards the edge of the sea. Sunbeds and wooden parasols can be rented. It has several great chiringuitos (beach bars or restaurants), where snacks, full meals and cocktails are served throughout the day. One of our favourite places to grab a bite to eat is Los Sardinales (Lossardinales.com) which serves a fantastic fish soup and catch of the day, or go upmarket to the swish La Cabane beach club, run by the hotel Los Monteros.

Further down from Playa Alicate is Playa Hermosa and it lives up to its name as low-rise coastline building make it an attractively low-key place to sit back and relax. Karma Beach (Karmabeachmarbella.com) is a very agreeable restaurant and bar beach-side that adds a touch of comfort to a post-swim bite of lunch. The food is international, the cocktails are well mixed and the Champagne is on ice. The only way to truly enjoy this beach, though, is to hire a cabana bed with floaty curtains and soft cushions. And… relax. 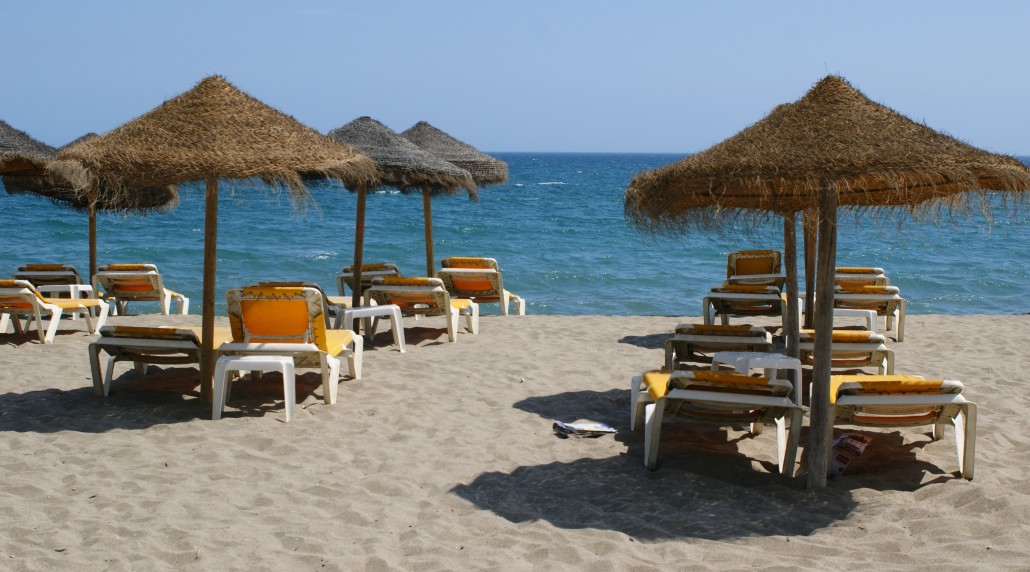 This very popular beach is to the far east of Marbella. Its stellar reputation means that during July and August it can be difficult to park, but in our opinion it’s still well worth perserving with. Why? Let us count the ways: for starters, there are beautiful sand dunes (Las Dunas de Artola) to find a secluded spot and a smattering of large palms providing natural shade. But there are also great amenities: there are chiringuitos with sun loungers, parasols, showers and toilet facilities as well as pedalos, kayaks, jet-skis for hire and even dolphin-watching tours. For families, the restaurants on the beach are very child-friendly with microwave facilities and children’s menus. A true all-rounder.

Beaches to the West of Marbella

Its location (near The Marbella Club Hotel and Hotel Puente Romano) means that this beach is often home to the rich and famous in the area. There’s a choice of chiringuitos and restaurants on the beach (including Trocadero Playa Restaurant) so bring your best cover-up ensemble – designer sunnies, hat, the Melissa Odabash works. The backdrop is green, with palms and pine trees leading down to sand that’s golden and coarse (normal for this corner of the Med) and a picturesque wooden pier – it’s pretty as a picture.

El Faro Beach is a great option if you’re staying near the centre of Marbella and want to twin a spot of beach chillin’ with some shopping or sightseeing in the Old Town. There’s a full complement of amenities: toilets, showers, restaurants, bars, sunbeds and even a children’s play area. It’s a small beach with shallow waters – as it’s cocooned in by breakwaters – and because of this it gets busy during the summer. There are some great fish places with an authentic, local feel to dine in over siesta. The last word in elegant fine dining it ain’t, but we like it all the same.

Playa Nueva Andalucia, Playa de Levante and Playa del Rio Verde are the three beaches in Puerto Banus. These wide, clean beaches are just a very short saunter from the port of Puerto Banus. Here, if the fancy takes you (and we highly suggest it does), you can hire a yacht or go on a boat ride easily (chat to our concierge for ideas). There’s nothing like sunbathing, lunching or travelling to a beach club on a luxury yacht.

To the west of Puerto Banus, Playa Nueva Andalucia is an LVC favourite as there are a couple of beach clubs very nearby – Ocean Beach Club (Oceanclub.es) and La Sala Beach Club (Lasalabythesea.com). It’s not all ultra-glamorous beach clubs, though: if you’re an adrenaline junky or travelling with teenagers, Playa Nueva Andalucia is also home to Costa Waterpark which is basically an assault course on the sea. It’s great fun, if perhaps more than a little exhausting for anyone whose age extends into double digits.

We could go on and on, to be honest. The best way to find the right beach for you is to hire a bike (there are various locations to choose from in Puerto Banus or Marbella), take a ride along the promenade and judge for yourself.

Quite liking the sound of stretching out on one of these Marbella beaches this summer? Make sure you’ve got the accommodation to match – check out our collection of nearby luxury villas.