Cadiz is a fascinating city where the term travelling deeper is taken to a whole new level. It encourages you to look underground, out to the horizon and be amongst the rooftops. Succumb to the easy going way of life of the gaditanos – relax, eat well and be inspired by this ancient city. Climb this eighteenth-century watchtower, learn about the watchtowers of Cadiz (some pictured above) and see Cadiz through its camera obscura at the top. A day on the beach or hit it at 6pm for cake – street food to beach food. Sellers usually roam the beaches from about 5pm to 6pm. Then grab a drink and watch the sunset over the bay. Taking over 100 years to complete and with its unique golden dome and silver collection it’s worth a visit.
Pl. de la Catedral, s/n, 11005 Cádiz. Catedraldecadiz.com Fresh food and casual eateries make the market the heart of the city. Hit the gastromarket side of the market for tapas.
Pl. de la Libertad, S/N, 11005 Cádiz Meander and stop for coffees or something strong in one of the pretty squares. Plaza de las Flores and Plaza de la Candelaria are two favourites. Beside the sea this city park has a playground, fountains and it’s a great place to run off little legs or meander after a long lunch.
Parque Genovés, Av. Dr. Gómez Ulla, s/n, 11003 Cádiz From archaeological artifacts to art and puppets, the museum of Cadiz is an interesting way to spend a couple of hours if not only to find out the importance of puppeteering in the city.
Address: Pl. de Mina, s/n, 11004 Cádiz. Museosdeandalucia.es The old main square of the city is a great place to start discovering Cadiz. This castle and lighthouse is on a small island with a walkway linking it (even at high tide) to the end of the pier at La Caleta beach.

It’s said that the father of Zeus, Tronos, had his temple on the island. The lighthouse that you can see today has Moorish foundations and that is just the beginning of this little island’s history.
P.º Fernando Quiñones, s/n, Cádiz

Home to one of Murillo’s finest works and one of the few Andalucian Baroque architectural examples of elliptical arches.
C. San José, 36, 11003 Cádiz For an evening surrounded by 18th century grandeur, check out this Neo-Mudejar theatre in the old town. (See its program here).
Pl. Fragela, s/n, 11003 Cádiz

These catacombs are much less morbid than you’d imagine with an incredible story. Access is six metres under the city through a courtyard in a residential building.
C. Valverde, n3, 11004 Cádiz. Catacumbasdelbeaterio.com Celebrated just before the beginning of Lent this very lively week-long festival sees everyone take to the streets in fancy dress. There’s traditional music in the form of satire singing groups that you can hear around the streets and at the theatre. Usually during February, 40 days before Easter.

19. Walk Around the Old Town Take in the feel of the city by wandering around two distinct areas: El Populo and La Viña, the latter of which is the old fisherman’s area. Don’t miss Plaza Tío de la Tiza and Restaurant El Faro.

A fine example of an Elizabethan-style palace from the 1800s.
C. Ancha, 28, 30, 11001 Cádiz. Only open on Wednesdays at 10.00hrs via prior arrangement through this email casapalaciodemora@gmail.com

A quick visit of this old hospital and chapel offers a magnificent El Greco painting of St Francis and a rather special central courtyard.
C. Hospital de Mujeres, 26, 11001 Cádiz Cadiz is at the end of a peninsula so there are regular boats going across to the mainland. Take a day trip to El Puerto de Santa Maria – see the sights like the Castle of San Marcos and do some sherry tasting.
Port: Av. del Puerto, 2B, 11006 Cádiz This Neoclassic building, once a former prison, is now an event and exhibition space.
C. Concepción Arenal, s/n, 11006 Cádiz

Tempted you to discover Cadiz city? Have a look at our selection of villas on the Costa de la Luz. 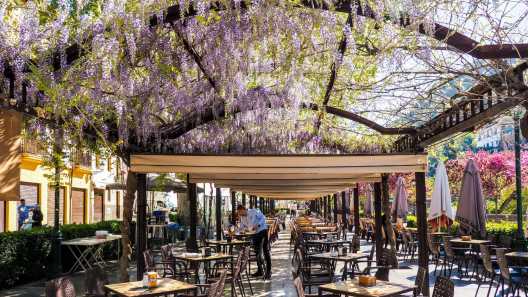 In Granada a small plate of food is offered with every drink. After a hard day's sightseeing, this tapa is a very welcome tit-bit served with a refreshing wine, beer or tinto de verano. Not all…